Brides! Bridesmaids! and Maids of Honor! Oh my!

SO.... I'm excited to share with y'all that I will have my first official wedding consultation tomorrow!  I met the Mother of the Bride (MOB) at a show a few weeks ago, who fell in LOVE with a piece but wanted it in a different color.

She was *so cute* to watch with this necklace.... she came over, talked to me about it and tried it on.  She noted the clasp (one of my favorite things about making jewelry), the little details and called her daughter (Bride) to get over and see it.  Daughter couldn't come, so a photo was sent... next thing I know...I'm showing MOB some pearls I have in the color they wanted and how I could change this and that to make it work for them.  As the day went on...I spy MOB coming back to the booth to look at it again....and with a friend....and Mother of the Groom (MOG)....reaching AROUND other customers to take it off the bust and show this one and that.... I felt like a rockstar!

Tomorrow - show time!  I've worked on a necklace redux with the correct colors and a little kick.  I've also made 1 other option and hope to do another.  I don't want to overwhelm them with choices, but DO want to offer something different since I've never seen the dress, the bride, the colors, or really *any other details*.  Do you know how HARD that is?!  Tonight, I came to the realization that the MOB fell in love with a piece that I made because I needed something new, not because I was trying to impress someone or find a Bride and that's the approach I needed to take with the other pieces....so.... keep your eyes peeled for the new version! 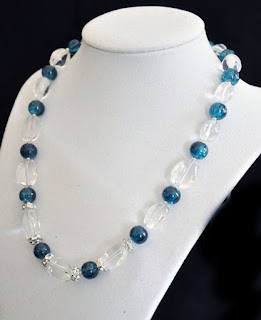 Posted by Linda A. 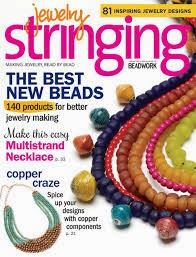